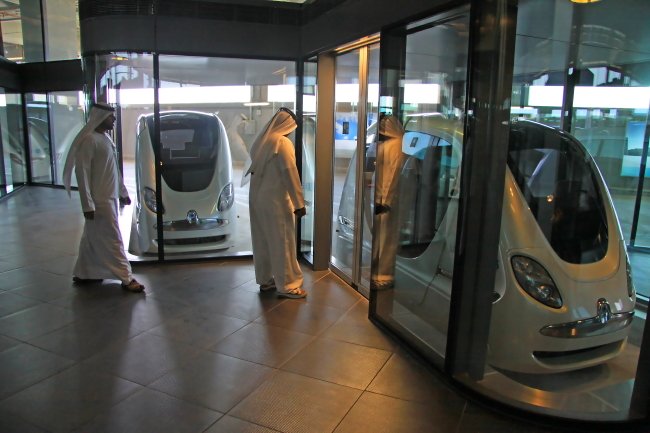 This paper investigates the implications of alternative land use and transport strategies for Macquarie Park, a typical high car‐dependent “edge city” within an emerging Australian multi‐ centred city form. Detailed simulations compare a transport scenario that incorporates a Personal Rapid Transit (PRT) network as a feeder for the existing transit nodes to a business‐as‐usual projection by 2030, and one reflecting current planned transport improvements (“Planned”). The environmental and urban impacts of the three scenarios are evaluated based on estimated differences in energy use, emissions, noise, and land area required for car parks. The PRT system was found to reduce the annual CO2 emissions by more than 26,000 tonnes compared to the business‐ as‐usual scenario and by more than 9,000 tonnes compared to the “Planned” scenario. The avoided public costs associated with emissions, noise and air pollution are US$13M per year compared to a continuation of present trends and more than US$5M compared to the planned transport improvements. A positive urban impact occurs from the smaller amount of land required for parking spaces. The greatest benefit of the PRT is a potential capital cost saving of more than US$430M from building car parks. A convenient and appealing local access solution such as Personal Rapid Transit could bridge the gap between the existing car‐dependent urban forms and the transit‐focused urban future.